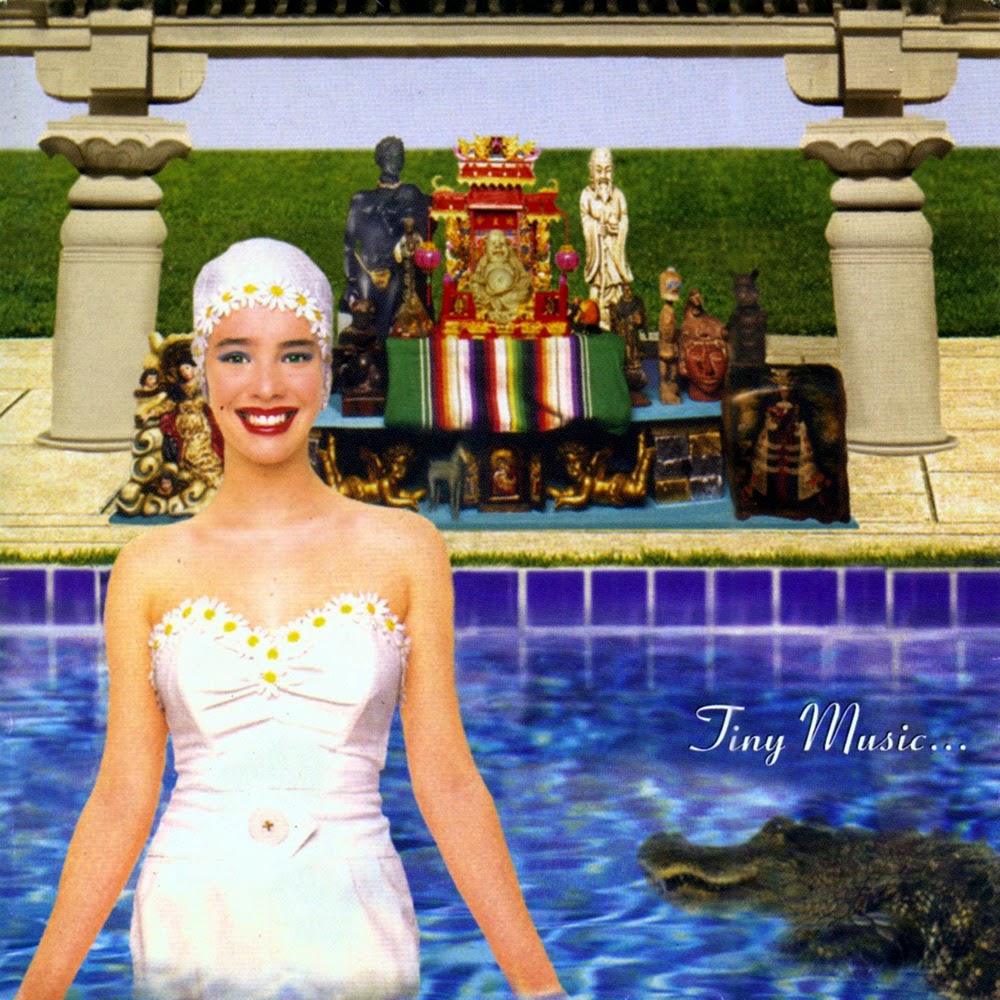 Could the eagerly awaited third release from the Rodney Dangerfields of alterna-rock be their swan song? Tiny Music: Songs From The Vatican Gift Shop (Atlantic) finds Scott Weiland, singer/lyricist for Stone Temple Pilots in the throes of a personal exorcism. His ongoing battle with heroin and cocaine came to a head with last year's well-publicized drug bust. Although fellow bandmates assert that Weiland's current rehab stint is going smoothly, their plans to tour in support of the new CD have been put on indefinite hold. Everybody's concerned that if they resume before Weiland regains his balance, the consequences could be disastrous (read: fatal). This might seem like so much well orchestrated bullshit designed to create controversy (or just plain PR), but you wont think so after listening to Tiny Music.

Following an opening instrumental warm-up ("Press Play"), STP dive headlong into the glam rock grunge of "Pop's Love Suicide", and it becomes painfully clear that all is not well in the Pilots' cockpit. "Pull the trigger on a pop gun/Mindless fools aggravate, pick at you in desperation" Weiland snarls, though not with his usual blend of sarcasm and mischief. He sounds totally pissed-off, like a man one episode shy of a nervous breakdown. As evidenced by this track (hell, half the album) Scott has a serious bone to pick with the music industry - artists and promoters alike. On "Tumble In The Rough" Weiland pleads, "I'm looking for a new stimulation/I'm looking for a new rock sensation", with Dean DeLeo's guitars cutting a staccato swath across a power-punk landscape. "Ride The Cliché" puts the matter across bluntly when Weiland sings "Just because you're so clichéd, it don't mean you wont get paid."

What's going on here? The ironic thing is that, despite their general maligning by the press, STP are true pop craftsmen. Tunes like "Plush", "Interstate Love Song" and "Pretty Penny" (from their previous releases) illustrate their ability to amalgamate the best rock'n'roll has to offer with remarkable dexterity. But if you're expecting similar hits on Tiny Music, you're in for a nasty shock. What you will find are some beautiful, disturbing songs that reflect Weiland's inner turmoil like mylar on glass. On "Lady Picture Show" he assimilates John Lennon's nasal croon, with guitarist Dean DeLeo borrowing a page from the Abbey Road  songbook - but the lyrics are anything but cheerful: "She hides because she don't know nothing anymore/She keeps a sunny face/It's locked and bagged/It's just outside the door."

Bassist Robert DeLeo contributes the other instrumental track, "Daisy" - a speakeasy blues number performed on electric guitar. DeLeo's jazzy phrasing shows the band isn't afraid to experiment with genres previously unexplored. Perhaps the most daring gamble on Tiny Music is "And So I Know", which pits Weiland's passionately defeatist observation on love against a lilting, smooth-jazz ambiance provided by Eric Kretz's unobtrusive percussion and Dean's evocative guitar (close your eyes during his solo and you can easily imagine Pat Metheny or Earl Klugh.) The sad verses are interpolated with the reassuring line "Campfire girls make me feel alright"; they bring to mind the musings of another tortured artist (and former junkie): Brian Wilson. In its own way, Tiny Music bears a strange kinship with Pet Sounds-era Wilson - a sonic pastiché of gorgeous melodies, intriguing harmonies, and emotionally heartfelt playing, with pain lurking just beneath the surface.

Tiny Music also includes its share of thrash-injected rockers, preserving their campus-icon identity. The Zeppelin-esque chord changes in "Tripping On A Hole In A Paper Heart" are joined to Eric Kretz's locomotive-like battery. "Art School Girl" gives Tripping Daisy a run for their money, complete with a blistering refrain reminiscent of early Kinks. And of course, lead single "Big Bang Baby" offers up a gritty vocal by Weiland, Dean DeLeo's twin-guitar attack, and Robert DeLeo's sinewy bass line. Comparisons between Tiny Music and Purple (their sophomore release) and Core (their auspicious debut) are inevitable, and not entirely unfair. The difference lies not so much in the music as how Weiland approaches the material. Even at his most lyrically descriptive, Weiland always managed a certain degree of detachment. On Tiny Music, his wounded heart is on public display.

REASSESSMENT: Billie Holiday's album, Lady In Satin was recorded toward the end of her career. It's been recognized as one of her strongest works, despite the fact that heroin and alcohol had severely ravaged her once-silky vocals. On Tiny Music, Weiland's vocals are likewise ravaged by the wages of heroin and alcohol, yet his passionate, sometimes crenulated singing actually accentuates the material.......in some instances it adds pathos to Weiland's lyrics. It's kinda ironic in retrospect, that the musical experimentation and rock scholarship that informs Tiny Music plays against such bitter couplets as "Sell more records when I'm dead/Hope it's sooner, hope it's near corporate records fiscal year" (from the somber "Adhesive", which boasts of all things, a mournful trumpet solo). The passage of time hasn't changed the album's poignancy - it was the darkest Stone Temple Pilots release to date, and remains even more so in light of Weiland's heart-wrenching backstory.

Popular posts from this blog 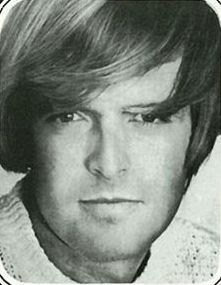 “Peaceful people, offering opinions/Protesting what you sincerely know is wrong/Be ready, be ready/You will probably be beaten/You will probably be arrested, and questioned/Your beliefs will be twisted/Your rights will be forgotten/Be ready....”
The excerpt above is not a treatise concerning the recent goings on in Ferguson, Missouri – the tune was written some forty-plus years earlier. Those words are not only prescient in nature, but serve as a rude awakening that things in America have actually gotten worse, not better. The man behind those lyrics is Bob Markley, and the song in question is “In The Arena.”
It opens Side One of Volume 2: Breaking Through, the third album by The West Coast Pop Art Experimental Band, but before we go any further, a little backstory is in order. Musicians Shaun and Danny Harris (bass and guitar respectively), along with Michael Lloyd (guitars), were three teenagers of marginal aptitude, whose songs tended to be boi…
Read more 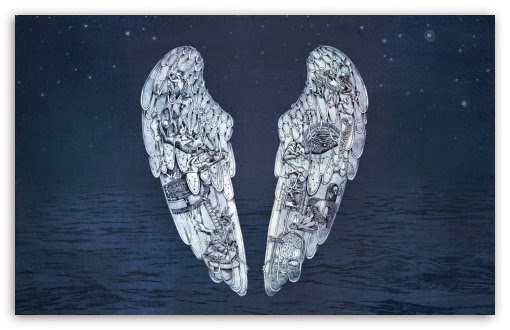 There's a moment that comes near the end of Ghost Stories(Parlophone/WEA), the sixth album proper by Coldplay, where singer Chris Martin breaks my heart - something he hasn't done since opening their watershed release, A Rush Of Blood To The Head with the elliptic-yet-haunting "Politik." There, Chris implored us to "open up your eyes" to the chaos of the world, before making the declaration, "Just give me love over this." I could feel every ounce of sincerity coming through in his voice, but unlike the lovesongs that moved other Coldplay devotees (from "Yellow" to "The Scientist", the latter also on Rush) I sensed that underneath, Chris was crying for the pain of being human. Folks only dance around this topic when writing songs of love, or so I thought.

The song in question on Ghost Stories is "Oceans." As on "Politik", a string arrangement figures prominently, and as on the former, the lyrics are deceptivel…
Read more